Do you recognize the privilege of your whiteness in our multi-racial society? 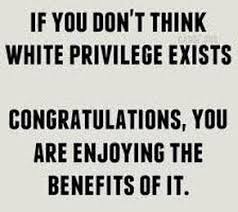 Today we begin our discussion of the reading of Robin Diangelo's book, White Fragility.

This is an extremely important book because it helps us understand the differrences between prejudice, discrimination, and systemic racism.

Many whites are quick to claim that they are not prejudiced, and this may be true, but do they engage in discrimnatory and racist behaviors often unknowingly? Yes, they do, all the time. And as a society, as well as communities and inviduals we can't fix what we aren't aware is broken.

The work of systemic racism is making the unconscious conscious.

Michael Eric Dyson, in the forward to White Fragility, writes,

"But whiteness goes even one better: it is a category of identity that is most useful when its very existence is denied. That’s its twisted genius. Whiteness embodies Charles Baudelaire’s admonition that “the loveliest trick of the Devil is to persuade you that he does not exist.” Or, as an alter ego of the character Keyser Söze says in the film The Usual Suspects, “The greatest trick the devil ever played was to convince the world that he didn’t exist.” The Devil. Racism. Another metaphor. Same difference.

The mission of this blog, Recognizing Systemic Racism, is to identify the "devil," to make the unconscious, conscious. Our individual spiritual growth, as well as the sancification of the world, depends on the purusit of this mission with the goal of enhancing people's awareness of how our systems impact all people.

If you would like to discuss this idea further, join other seekers at the online discussion group, "systemic racism" by joining the group.

Email ThisBlogThis!Share to TwitterShare to FacebookShare to Pinterest
Labels: White Privilege the book