Email ThisBlogThis!Share to TwitterShare to FacebookShare to Pinterest
Labels: Film 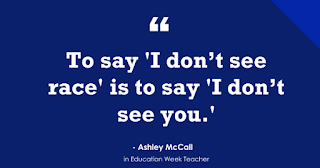 To be sure, like the rest of race, whiteness is a fiction, what in the jargon of the academy is termed a social construct, an agreed-on myth that has empirical grit because of its effect, not its essence.

But whiteness goes even one better: it is a category of identity that is most useful when its very existence is denied. That’s its twisted genius.

Whiteness embodies Charles Baudelaire’s admonition that “the loveliest trick of the Devil is to persuade you that he does not exist.” Or, as an alter ego of the character Keyser Söze says in the film The Usual Suspects, “The greatest trick the devil ever played was to convince the world that he didn’t exist.” The Devil. Racism. Another metaphor. Same difference.

Black history has been marginalized 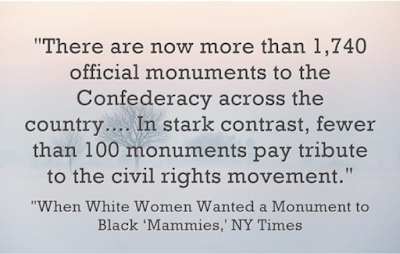 From Alison M. Parker in New York Times on 02/06/20
In 1923, a group of white women wanted to build what they called a “monument to the faithful colored mammies” in Washington. These women, members of the United Daughters of the Confederacy, pressed lawmakers in Congress to introduce a bill. The Senate passed it, but the bill stalled in the House after fierce opposition from black women, including Mary Church Terrell and Hallie Quinn Brown, members of the National Association of Colored Women.
The fight over a proposed monument to black “mammies” exposes the lie of those who describe Confederate monuments as innocuous celebrations of Southern heritage. Lost Cause memorials are hurtful public symbols of white supremacy. Consider that most Confederate monuments were not erected by grieving widows or relatives immediately after the Civil War. A majority were put up in the 1890s and early 1900s by Southern whites hoping to justify the spread of Jim Crow while erasing the legacy of Reconstruction, a time when African-Americans had gained citizenship and voting rights.
There are now more than 1,740 Confederate monuments, statues, flags, place names and other symbols in public spaces across the country, not counting more than 2,600 markers, battlefields, museums and cemeteries that commemorate the Confederate dead or the many hundreds of statues of staunch segregationists. To date, only about 115 have been removed. In stark contrast, fewer than 100 monuments pay tribute to the civil rights movement.


Are there other dimensions that you would like to add?

Supposing your identity is a single black poor gay muslim female who lives in a large city and is 32 years old with cerebral palsy?

Supposing you are a married white middle class Catholic male who lives in the country and is 42 and owns a large farm with 3,000 acres which grows primarily corn and soybeans?

What is your identity description in one sentence?