Is the United States a nation of hypocrites? 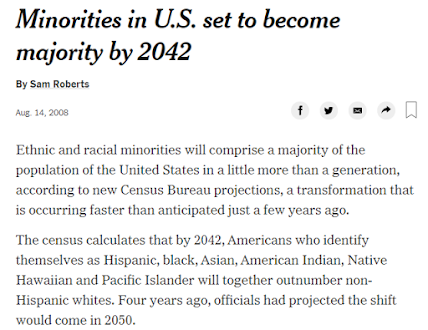 Comment -  think the Democrats have got over their idea that just because someone looks ahead in the polls doesn’t mean that will actually play out in the ballots.
Response -  Wilkerson mentions the Bradley effect on p 327 which is a reference to the phenomenon of people lying to pollsters because they want to be politically correct but in private they vote along caste (racist in America's case) lines whether consciously or unconsciously.
Wilkerson describes group identity, and whites are going to stick up for whites at the expense of Blacks, Hispanics, Asians, Native Americans, etc. People deny they are racist but they support the caste system and it is the caste system which made America great for whites by subjugating nonwhites in numerous ways justifying it as nonwhites being inferior and even subhuman..
This then leads to the 2042 phenomenon when whites numerically will become the minority race in the US. Whites are scared of being subjugated by nonwhites and sinking to the bottom of the newly emerging caste system in which they will get what they have been dishing out for 400 years.
So whites will support Trump at all costs, even the loss of their health insurance, a decrease in income, a more polarized society, even the loss of their democracy itself.
To be honest, whites have never believed in democracy unless the cards were dealt in their favor so they could cheat at the expense of nonwhites. Now that true democratic processes threaten change they work strenuously to suppress it. There has never been in the world a bigger group of hypocrites.
at October 27, 2020

Email ThisBlogThis!Share to TwitterShare to FacebookShare to Pinterest
Labels: 2042, Hypocrisy of U.S.