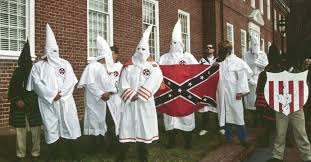 Across the United States, there are more than seventeen hundred monuments to the Confederacy, monuments to a breakaway republic whose constitution and leaders were unequivocal in declaring the purpose of their new nation. “Its foundations are laid,” said Alexander Stephens, the vice president of the Confederacy, “its corner-stone rests upon the great truth that the negro is not equal to the white man; that slavery subordination to the superior race is his natural and normal condition. This, our new government, is the first, in the history of the world, based upon this great physical, philosophical, and moral truth….With us, all of the white race, however high or low, rich or poor, are equal in the eye of the law. Not so with the negro. Subordination is his place. He, by nature, or by the curse against Canaan, is fitted for that condition which he occupies in our system.”
Wilkerson, Isabel. Caste (Oprah's Book Club) (p. 335). Random House Publishing Group. Kindle Edition.
With the glorification and honoring of perpetrators of treason and leaders of subjugation of Blacks, the Blacks in post civil war America had Confederate Leaders looking down on them from pedestals, forcing them to ride on roads dedicated to their honored memory as well as attend schools and do business in buildings named to honor their tormentors and oppressors. Even public holidays in some states such as Robert E Lee day in Mississippi and Alabama celebrate the leader of those who impose the caste system in their states. Flying of the Confederate flag until 2020, a symbol of oppression and subjugation, was a daily reminder of the values and status of the ranks of the caste system unless anyone forget their place.
Is it way past time to remove these symbols of the caste system on which America built its civilization? Are we to be a better nation where the inherent worth and dignity of all people is affirmed and promoted rather than denied and denigrated?
at October 30, 2020

Email ThisBlogThis!Share to TwitterShare to FacebookShare to Pinterest
Labels: Caste